How often have you boarded a flight and noticed one or two passengers who are acting a bit peculiar?

You might pass it off as stressful flight conditions or dissatisfaction with the airline, but they could be suffering from fear of flying. It becomes more evident as takeoff approaches. The wide-eyes, clenched fists, profuse sweating, and rocking motions are among its symptoms. 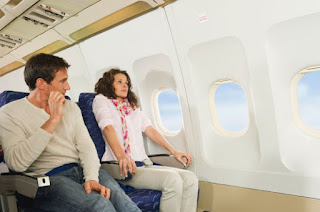 I remember a middle-aged man who once boarded the aircraft, took his seat next to the window exit and stuffed a rather large backpack under his seat. He smiled contently during the exit row briefing, and when we hit turbulence in flight he clutched his backpack as if it were a teddy bear. But the smile never left his face.
When I asked him how he was, he told me that he used to be a fearful flier but had overcome his phobia. When I asked how he told me that he carried a parachute on every flight.

Everyone has some degree of flying fear. You put yourself in a small cylindrical tube, loaded with flammable liquid, trust your life with some unseen pilot who, if media reports are to be believed, probably has a drinking problem. To make matters worse, you’ve been bombarded with graphic details of previous air fatalities.

Did you know that at least one out of every six adults has a fear of flying, also known as aerophobia or aviophobia? It is estimated that 35 percent of all airline crews, flight attendants and pilots, also have either a fear of heights or flying. We do this for a living, so don’t worry if you do too. The key is recognizing it and getting it under control.

The fear of flying has many different components, many of them stemming from other fears such as enclosed spaces, heights, strange sounds, sitting in stale air, crowded situations, lack of control, and the latest fear – terrorism.

Air travel is the second safest mode of mass transportation in the world. This is second only to the escalator and elevator. Your chances of being involved in an aircraft accident are approximately 1 in 11 million. Your chances of being killed in an automobile accident are 1 in 5000. The most dangerous part of your flight is the drive to the airport.

All airplanes are designed and built to withstand far more stress than occurs in normal flight, including ordinary and extraordinary turbulence. While it is true that a severe storm could damage an aircraft, this is why flights will divert around or cancel due to thunderstorms.

Here are the top seven tips for the fearful flyer:
#1. Don’t conceal it. Tell the gate agent when you check-in, the flight attendant when you board, and the passengers around you when you sit down. It’s nothing to be embarrassed about, and what you need is support, not added frustrations by suffering in silence. I know I make a special effort to check in on my fearful flyers several times during a flight.

#2. At check-in, ask for a seat at the very front of the cabin as possible. Turbulence is usually much greater in the back of the aircraft. If you have an extreme dread of flying, don’t try to overcome your fears on a long flight. Take the shortest flight you can and preferably in the biggest plane possible.

#3. Keep distracted. Watch the movie even if it’s bad or you have seen it already. Read a book or do a crossword puzzle. Do anything that keeps your mind occupied and not dwelling on morbid possibilities.

#4. There are various classes for those who are afraid to fly. In some cases the final test is an actual airplane flight. The courses used to be quite expensive, but now with fares being at an all-time low, I am sure the classes are less expensive as well.

#5. Avoid coffee or other caffeine products as an overly hyper state of mind will only exacerbate your anxiety. But drink other liquids, as dehydration only contributes to the fear process. Some people recommend a glass of wine to calm the nerves, but don’t overdo it.

#6. Listen to peaceful and calming music. Your mind tends to wander and hear sounds that either don’t exist or are perfectly normal flight noises.

#7. The rubber band technique. Wear a rubber band around your wrist and if you feel yourself becoming agitated, snap the rubber band against your skin. Apparently, the pain is a reality bite and takes the mind off the turbulence.

The Standards To Qualify For Online Flight Attendant Training